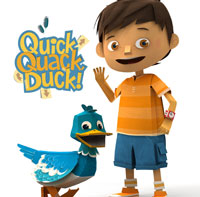 The deal will see the series air on Nick Jr. channels globally including Nick Jr. US.

Quick Quack, Duck!, which is based on an award-winning short film called The Happy Duckling and stars a seven-year-old boy and his loyal duck friend in an interactive pop-up world, is produced by Zodiak Kids prodco The Foundation in partnership with creators QQD Limited and Korean animation studio High 1 Entertainment.

Part of the new deal will also see Nick Jr. work with The Foundation and QQD on the creative development of the series, which is currently in pre-production.

Zodiak Kids initially inked the co-pro deal for the series in April this year.