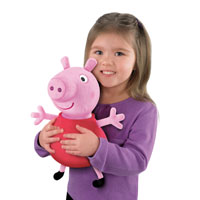 Entertainment One Family (eOne Family) has finalized new licensing deals with US publishers Scholastic and Candlewick Press and retailer Toys 'R' Us for its hit preschool property Peppa Pig.

Entertainment One Family (eOne Family) has finalized new licensing deals with US publishers Scholastic and Candlewick Press and retailer Toys ‘R’ Us for its hit preschool property Peppa Pig.

Toys ‘R’ Us has acquired exclusive retail rights that will see a new line of Peppa Pig toys produced by Fisher-Price hit Toys ‘R’ Us stores in the US in August.

The line includes a tea set, talking plush toys, playsets, a playhouse and an assortment of character figures.

To promote the retail launch, eOne recently partnered with Kidtoons, which brought episodes of Peppa Pig to more than 160 movie screens in the US throughout April, and it has plans to launch an official US Peppa Pig website and Facebook page.

Meanwhile, eOne has signed on Scholastic and Candlewick Press as publishing partners for Peppa Pig in the US.

Both publishers will work with Fisher-Price and eOne on a co-ordinated US retail launch in August when the first Peppa Pig toys, books and DVDs will be released.