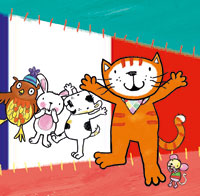 The new deals further expand the scope of the IP, which currently has 11 licensees on board in the UK including toyco Golden Bear for plush, plastics and arts and crafts products launching this fall. The Joester Loria Group handles licensing for the brand in North America.

Poppy Cat is set to air on France 5 in June. (Distributor Cake Entertainment sold the series to France Télévisions in February.)

The series will also launch on the new NBC Kids weekend block in the US from July making it available in more than 110 million US homes.