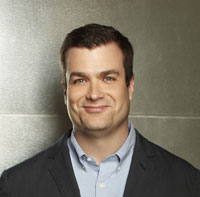 In his new position based in Burbank, California and reporting to Cartoon Network’s chief content officer Rob Sorcher, LeLash will be responsible for overseeing the development of CN’s animated comedy series and will continue to lead the studio’s shorts development program.

He is also currently an executive producer for CN’s hit animated series Adventure Time and Regular Show, and supervises other comedies produced by CN partners, including Warner Bros. Animation’s MAD and The Looney Tunes Show.

Lelash joined Cartoon Network in 2005 as a manager of comedy animation in the original series department, and in 2008 he moved up to director of new and current series.

As director of comedy animation, Lelash was a production executive on series including The Marvelous Misadventures of Flapjack and Class of 3000.

The latest move comes on the heels of Cartoon Network becoming the number-one network among boys ages six to 11 and nine to 14 in the US.