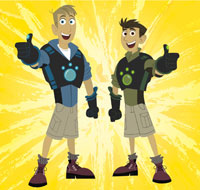 Wild Kratts to air in Germany

The series, which was created and developed by brothers and zoologists Martin and Chris Kratt, is distributed in the US and Canada by Kratt Brothers Company and internationally by 9 Story Entertainment.

It premiered in January 2011 on PBS Kids Go! in the US and TVOntario, Knowledge Network and Télé-Québec in Canada.

In September 2011, Kratt Brothers Company and 9 Story received a second season order from PBS Kids Go! in the US and TVOntario in Canada for the series.