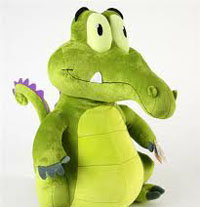 Following in the footsteps of Angry Birds, Fruit Ninja, and Cut the Rope, Disney's hit app Where's My Water is expanding into merchandising after only seven months since its debut on the Apple App Store.

Following in the footsteps of Angry Birds, Fruit Ninja, and Cut the Rope, Disney’s hit app Where’s My Water is expanding into merchandising after only seven months since its debut on the Apple App Store.

Disney Mobile and Disney Consumer Products (DCP) are expanding the property after inking new licensing deals for the first line of consumer products based on the popular app.

Deals have been secured with Hasbro, Jakks Pacific/CDI and Toys ‘R’ Us for products that feature the brand’s popular characters Swampy the Alligator (Disney’s first original character for mobile), Cranky and Allie.

The new line, which will hit mass US retailers next month with select items currently available at Disney Store locations and DisneyStore.com, includes plush and novelty toys, consumer electronics accessories, and apparel and accessories.

The line will continue to roll out this fall with a face-to-face game, consumer electronics, stationery, home accessories, and Halloween costumes.

In addition, a 12 episode web series called, Where’s My Water?, the Adventures of Swampy  will expand the IP further when it debuts online later this year.

Where’s My Water? is currently available on the Apple App Store for iOS devices and on Google Play and Amazon Appstore for Android.