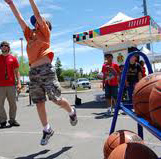 The 10-week campaign, in partnership with the President’s Council on Fitness, Sports & Nutrition and in support of First Lady Michelle Obama’s Let’s Move! initiative, will kick off on June 10 in Atlanta and travel across the country to 17 markets including New York, Miami, San Francisco, and Los Angeles. The tour will eventually wrap up on August 10 in Washington, D.C.

The tour will once again be supported by on-air public service announcements, on-site activity stations and interactive digital activities. Joining Cartoon Network again this year as a co-sponsor is Crayola.

The Move It Movement is part of the network’s pro-social efforts to provide support and encouragement in the ongoing battle against childhood obesity through such activities as daily recess, health & wellness education and active after-school involvement.