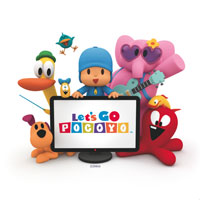 Meanwhile, in other Pocoyo news, the English narrator for the television series, acclaimed UK actor/writer/presenter Stephen Fry, joins Pocoyo in this month’s “Get Caught Reading” campaign, an annual initiative by the Association of American Publishers that encourages the joy of reading for young people.