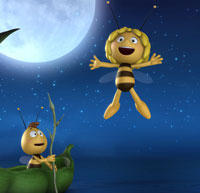 Thunderbird will also help Studio 100 with US sales of the series’ 39 half-hours targeted to kids ages five to seven.

Maya the Bee is based on the German book of the same name, which is now enjoying its 100th anniversary, and has a long history in television and comic books.

The new Maya the Bee series is produced by Studio 100 Animation, in association with TF1 and ZDF.