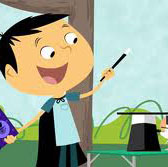 The new interactive adventures, which are currently available on the website, feature nine-year-old Noah who, while living with his grandmother in a Spanish community, must find ways to interact with the locals. His journeys eventually take him to the Arctic, a dude ranch and a circus.

The short new videos feature embedded video games unlocked by cursor movement. The new Curtain Up game is now live and lets kids create their own stage narrative introducing them to digital storytelling and helping them with replay and retention of vocabulary and phrases.

Noah’s Adventure, which is board-game themed, will debut later this month and additional games and videos are set to roll out in June and through this fall.

Each new video for Oh Noah!, which is produced by public media provider Thirteen in association with New York’s WNET, will also feature hands-on activities for parents/caregivers and lesson plans for teachers.