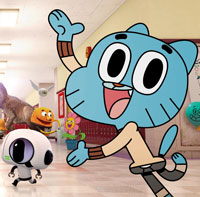 And in the lead-up to the launch, the Canadian cartoon channel will air weekly nested programming blocks on Teletoon, Teletoon at Night and Teletoon Retro.

Starting Saturday, May 5, Teletoon will broadcast a weekly block of Cartoon Network programming.

The preview lineup includes Cartoon Network shows The Amazing World of Gumball (pictured) and Dexter’s Laboratory on Teletoon, The Venture Bros., Harvey Birdman, Attorney at Law and Aqua Teen Hunger Force in the Adult Swim block on Teletoon at Night, and Powerpuff Girls and The Grim Adventures of Billy and Mandy on Teletoon Retro.

The nested blocks will cease airing on Teletoon, Teletoon at Night and Teletoon Retro on July 4.

The deal between Teletoon and the Turner Broadcasting System to bring Cartoon Network to Canadian viewers was announced in February.

The digital, ad-supported channel will feature Cartoon Network programming between 6 a.m. and 9 p.m., followed by the Adult Swim late-night lineup commencing at 9 p.m.