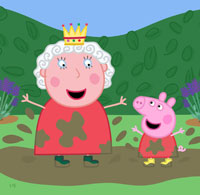 In celebration of the Queen's Diamond Jubilee set for the extended weekend of June 2 to 5 this summer, Entertainment One (eOne) has announced its Peppa Pig property will mark the event with a special episode starring the Queen herself, a DVD release, and a book launch.

In celebration of the Queen’s Diamond Jubilee set for June 2 to 5 this summer, Entertainment One (eOne) has announced its Peppa Pig property will mark the event with a special episode starring an animated version of the Queen, a DVD release and a book launch.

The Peppa-fied Queen Elizabeth’s upcoming appearance on the ep entitled “The Queen” marks the first time a human character from the real world has been featured in an episode of the hit preschool series.

A DVD release of the special episode is also set for May 21 and a book published by Ladybird based on the episode called Peppa Meets the Queen launched on May 3.