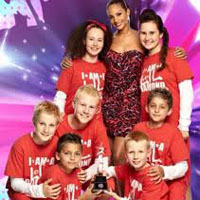 UK kidcaster CBBC has made a raft of new programming commissions and pickups that include three new documentary series (Secret World Of..., Hoopla, Superhumans) and five pickups (All Over the Place USA, Alesha's Street Dance Stars, Sam & Mark's Big Friday Wind-Up, Who Let The Dogs Out, Who Let The Dogs Out and About).

UK kidcaster CBBC has made a raft of new programming commissions and acquisitions that include three new documentary series (Secret World Of…, Hoopla, Superhumans) and five pickups (All Over the Place USA, Alesha’s Street Dance Stars, Sam & Mark’s Big Friday Wind-Up, Who Let The Dogs Out, Who Let The Dogs Out and About).

The new Hugh Lawton-produced, five x half-hour series Secret World Of… takes a behind-the-scenes approach as it examines the lives of young people coping with fame.

Included in the series are stories exploring how a young dance crew collaborates with the English National Ballet, how the under 18s team at Manchester City’s Football Academy balances football with regular teenage lives, and a casting segment on Shrek the Musical.

Executive produced by Annette Williams for CBBC and produced by Steve Ryde, Hoopla is a new 10 x 60-minute comedic program hosted by popular CBBC personalities Dick and Dom that takes viewers on a wild ride through the host’s new circus-themed home which includes a big top, rides, side shows, games and celebrity guests.

Meanwhile, BBC Scotland’s team has been commissioned to create the 10 x 28-minute Superhumans , which follows extreme explorer Tim Fizthigham as he examines the lives of real-life superheroes and their unbelievable talents.

For the pickups, Maria Stewart-produced travel documentary series All Over the Place USA (13 x 30 minutes) is returning for a third series and this time takes Ed Petrie and his friends on a journey to the US.