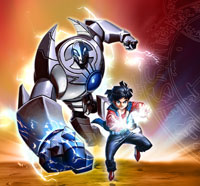 Kids cable channel JEI closed a cable and satellite TV deal for the 52 x half-hour action-adventure series and is set to air the series this April.

For licensing, Joon International has been tapped to rep the property in the territory and Spin Master’s local distributor Toyskool will distribute the Redakai TCG (trading card game) over the summer, with the rest of the toy line set to roll out at retail this fall.