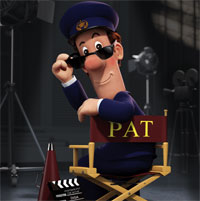 The first feature film based on the BBC's longest running animated series Postman Pat is set for a 3D release in UK theaters on Friday, May 24, 2013.

The first feature film based on the BBC’s longest running animated series Postman Pat is set for a 3D release in UK theaters on Friday, May 24, 2013.

Postman Pat: The Movie, which is currently in production and backed by Icon Film Distribution, Lionsgate UK, Classic Media and RGH Entertainment, will focus on main character Pat (Stephen Mangan) who becomes tempted by money, fame and a shiny new uniform after entering a national TV talent show.

Mike Disa (Hoodwinked Too! Hood vs. Evil) is on board as director and popular Harry Potter actor Rupert Grint and David Tennant (Doctor Who, Harry Potter) will also lend their voice talents to the film.

Postman Pat the series airs on CBeebies in the UK and on other networks in more than 80 territories worldwide.