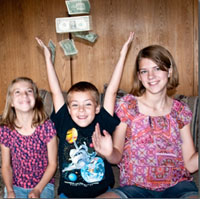 In-app purchases are all over the place, including children's apps featuring well known brands. It's often referred to as the freemium model of game design - get the base app for free (or dirt cheap) then buy expansion packs and add-ons for cost within the app.

Upgrade now to play the next level of Super Awesome Rainbows of Happiness Game! Just 99 cents!

In-app purchases are all over the place, including children’s apps featuring well known brands. Highlights for Children Hidden Pictures. Sesame Workshop’s Elmo Calls. Disney Spotlight Karaoke. It’s often referred to as the freemium model of game design – get the base app for free (or dirt cheap) then buy expansion packs and add-ons for cost within the app.

So, in response to parents and developers, here’s what I think. As a warning, please prepare yourself, because I’m about to say something that is not in-line with my generally altruistic, child-friendly design principles.

developers need to implement in-app purchases responsibly. Kids should not be able to make purchases if the parents don’t want them to.

Several of the people I’ve worked with in the past may have just hit the floor. Because I’ve argued vehemently against this in the past. Seriously. I’ve totally played the “I’m an artist!” card and declared that they’re destroying the integrity of my designs by insisting that they must also make money on the game. Didn’t know I could be such a prima dona, huh?

What happened to change my mind? I learned more about the economics of apps, for one. It’s really hard to make back your money, so every bit helps. It is a business after all. But I also realized that for many, many apps, it makes far more sense to organize content as a series of in-app purchases, like expansion packs. Who wants to have forty different Hidden Pictures apps on their iPad when it can all be neatly packaged and organized in one app? It’s just better design in many cases. What if your eBooks were all individual books on your iPhone menu screens. Cluttered and impossible to navigate, right?

So despite this realization that in-app purchases are not the worst thing in the world, let me say for the record that I’m fully against the idea of tricking kids into buying stuff. That’s just dumb and bad design. (A blog post a few weeks ago by Rian van der Merwe gets at this, too.)

So don’t do sneaky, dirty, underhanded tricks that will lead to a child (or anyone) accidentally making purchases they don’t want. And don’t put giant SELL buttons on the child-facing screens. I’m looking at you, Monster Meter. I love you lots for your whimsy and humor, but the “More Apps” button is out of line. 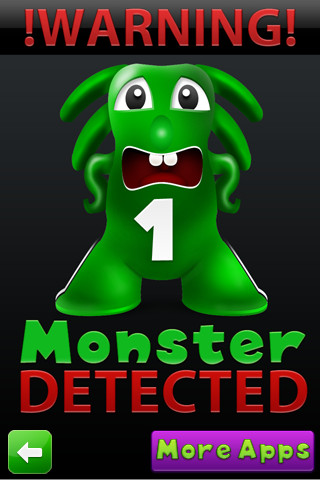 Put In-App Purchases Behind a Gate

So compromise. Put the in-app purchases behind a gate that only a parent can navigate. Yes, dear developer, you will likely lose some purchases because you implemented a road block. But you’ll also gain lots of popularity points from parents who are clamoring for content, especially content that doesn’t ding your credit card.

The Elmo Calls app does this really nicely. You have to tap a button to activate it and then a slide bar appears to open the parents control areas. 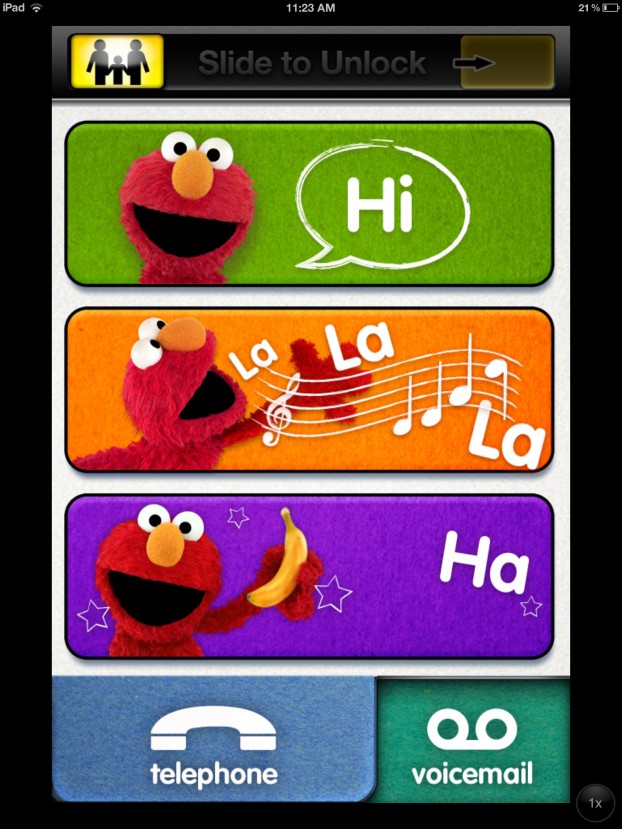 Or you can have them enter a password. Or do something that no child could possibly do, like touch all four corners simultaneously or algebra. (Play Funky Fingers for inspiration.)

The point is that a little hurdle is all it takes. Then the developers still have a shot at recovering their costs and the parents can rest easy that those little preschool hands are prevented from purchasing yet another cowgirl clothing expansion pack for the digital monkey pet…

We’re heading to Sandbox Summit soon, so if you’re in Boston and want to meet up, give us a yell. Or give us a yell just because at kidsGotGame@nocrusts.com