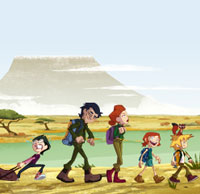 KiKA picks up The Green Squad

The latest deal adds to an expanding list of broadcasters that have acquired the series including France 5, RTBF (Belgium), Minimax (Central and Eastern Europe), Noga (Israël), Al Jazeera (Middle East), and Canal Plus (Poland).