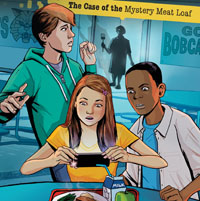 The first two books (Case of the Mystery Meat Loaf and Case of the Missing Moola) in the Club CSI series, licensed by CBS Consumer Products, are written by popular children’s author Dave Lewman (Batter Up, SpongeBob! and other SpongeBob titles) and will be published this month. Lewman has also penned upcoming titles in the series to be released this summer and beyond.

The books feature a group of junior high school sleuths who solve capers at their school after forming Club CSI out of their love for their forensic science class.

As part of this month’s promotion for the series, and in a deal with Simon & Schuster, the CSI: The Experience exhibition at the MGM Grand in Las Vegas will host an interactive launch event including mock crime scenes.