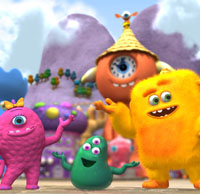 Adding the CBC- and SRC-commissioned series to their skeds are Discovery Kids Latin America, HOP! Channel (Israel), EBS (Korea), Astro (Malaysia) and Now (Hong Kong). The Jeff Rosen creation, which is produced by DHX Media’s Halifax-based studio, will launch in Canada this spring.