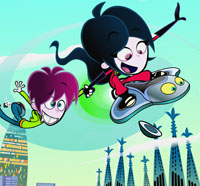 Lucky Fred, an Imira co-production with Televisió de Catalunya (Spain), RAI Fiction (Italy) and Top Draw Animation (Philippines), follows the adventures of 13-year-old Fred who has a personal robot that can transform into anything he wants.

The deals follow shortly after Imira announced a Lucky Fred app will be available worldwide via the Andriod Store and iTunes’ App Store.