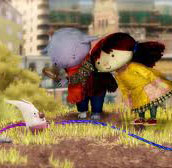 Walker is set to publish the first three licensed titles based on the series by Christmas 2012.

The Ragdoll Productions series, which is based on artwork from acclaimed illustrator Joel Stewart and bowed on CBeebies in September 2011, features the adventures of two friends who live on an island in the middle of a park surrounded by the big city.

The deal adds to the expansion of the IP after a recent deal by BBC Worldwide named Rainbow Designs as the UK master toy and gift licensee for the series.