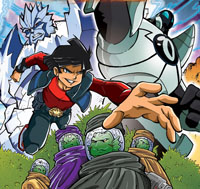 Redakai gets into graphic novels

The first novel will be available in October 2012 with the second arriving in February 2013.

The deal adds to the brand’s already large number of consumer tie-ins which include a trading card game, DVDs, and toys.

Redakai, which is a co-production between Spin Master and Zodiak Kids/Marathon Media, airs on YTV in Canada and Cartoon Network in the US.