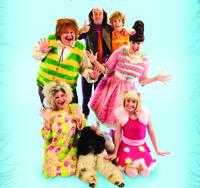 The series, which target kids ages four to six and airs across EMEA in 112 territories on Cartoonito, is commissioned by Turner Broadcasting, which holds EMEA broadcast and home entertainment rights for the seiries produced by London’s Adastra Creative.

Ha Ha Hairies tells the humorous stories of a hairy family in Hairyland who often tangle with their nemesis, Boris Boo Hoo. All of the series’ characters, except two animated fairies, use miming over speaking.

The Ha Ha Hairies is being scripted in English and Welsh.  S4C is the commissioning Welsh-language broadcaster.