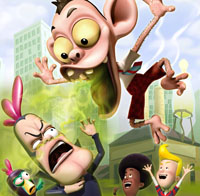 The 52 x 11-minute series, co-produced by Impossible Kids, Sparky Animation, Editude Pictures, and London’s Walker Productions, is based on a book series by British writing team Knife and Packer and published by Walker Books in the UK.

Fleabag Monkeyface features the smelly and gross adventures of a man-made half-monkey, half-boy and his creators Gene and Gerald who must keep the evil Dr. Dirk Spamflex at bay from reclaiming their hit TV series Gross Out TV.

The series was commissioned by UK broadcaster ITV/CiTV and debuted in December 2011 on CiTV.