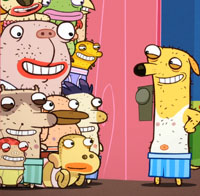 On board for seasons two and three are Super RTL (Germany) and Canal+ France for its Canal+ Family and TéléTOON+ channels. Luk International (Spain and Portugal) has snapped up season three while Astral (Canada) has secured seasons one and two for its French language VRAK TV.