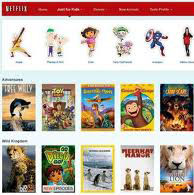 Taking cross-platform opportunities to greater heights, Netflix is making its Just For Kids section for kids ages 12 and under available on Sony's PlayStation 3 gaming console in the US.

Taking cross-platform opportunities to greater heights, Netflix is making its Just For Kids section for kids ages 12 and under available on Sony’s PlayStation 3 gaming console in the US.

The Just For Kids section for the PS3 lets kids click on a character-based selection of icons for easy access to popular kids titles such as Bob The Builder, Thomas the Tank Engine and Caillou.

The section also displays titles organized by genre, such as superheroes, princesses, dinosaurs and girl power, features simple plot descriptions, and Netflix members can also customize their choices based on taste and favorites.

The deal with PS3 follows on the heels of its Just For Kids launch on Nintendo Wii in November 2011. The section is also available for the PC, Mac, and Apple TV, and Netflix expects to launch on Xbox 360 Live and tablets later this year.

Since Just For Kids debuted on Netflix in August 2011, more than one billion hours of kids titles have been viewed by Netflix members.