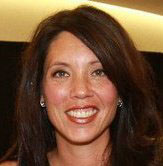 With more than 13 years in the industry, Ling has produced kids series such as The Snow Queen for BBC and CBC, Rollbots for YTV and Rob the Robot for TVO.

She starts work at Mercury’s Ottawa offices on March 5.