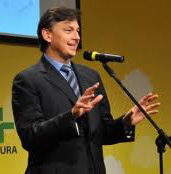 Sesame Workshop has two new VPs with the promotions of Robert Knezevic to VP, international project manager, and Dr. June Lee to assistant VP of research in the global education department.

Sesame Workshop has two new VPs with the promotions of Robert Knezevic to VP and international project manager, and Dr. June Lee to assistant VP of research in the global education department.

Both will report to Dr. Charlotte Cole, SVP of global education.

Knezevic joined the Workshop in 1997 as a senior producer for Alam Simsim, the Egyptian co-production of Sesame Street, and contributed to the development of the first HIV-positive Muppet character, Kami, who appears on Takalani Sesame, the South African adaptation of Sesame Street.

In his new role, Knezevic will be responsible for developing new international initiatives and global partnerships with organizations that share the Workshop’s mission.

He will also directly supervise the work of department team leaders who manage projects in Africa, Middle East, Asia and Latin America, as well as work on a mission to mobilize Sesame’s global family of Muppets to raise awareness about safe road practices as part of the UN Collaboration of Road Safety.

Lee, who started at the Workshop six years ago and formerly served as director of education, will oversee the org’s international research agenda and will continue to enhance training materials and overall engagement with the Workshop’s coproduction partners around production research.

She has worked on numerous projects for the Workshop, including a longitudinal study of more than 6,000 children in Bangladesh, a recently published study of educational impact in Indonesia and the meta-analysis of international co-productions completed by researchers at the University of Wisconsin.