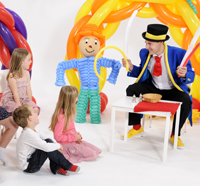 The series, which is filmed on location at Halliford Studios in Shepperton and hosted by balloon artist and magician David Crofts (Mr. Balloonie), and newcomer Zoe Spurden, follows a group of children as they shape balloons into household objects and creations inspired by the world around them.

Some episodes are also shot at off-site locations including a farm and aquarium, and the series explores themes including dinosaurs, pirates, planes and gardening.