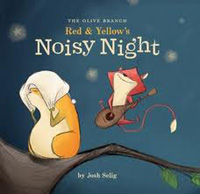 Coinciding with the book launch of Red and Yellow’s Noisy Night, which teaches children about conflict resolution and mutual respect, will also be the release of red and yellow plush toys by publisher Sterling Children’s Books (Puff, the Magic Dragon).

Little Airplane Productions’ non-profit arm Little Light Foundation serves as home for The Olive Branch which made its premiere on Nick Jr. US on June 1, 2010.

The Olive Branch was inspired by Selig’s experiences working in children’s television with Israelis and Palestinians in Jerusalem and is the foundation’s first creative endeavor.