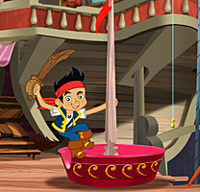 A toy line based on Jake and the Never Land Pirates will be released in June featuring plush, role play and accessories from Just Play and action-oriented play sets and figures from Fisher-Price, including Jake’s Pirate Ship, designed after Bucky, Jake’s ship in the series.

The series, which has reached more than 110 million viewers worldwide, airing in 166 countries in 35 languages through fall 2011, airs daily during Disney Channel’s Disney Junior programming block for kids ages two to seven and will be prominent on the new 24-hour Disney Junior channel launching in the US on Friday, March 23.

For the other Disney Consumer Product lines, toys based on new animated series Doc McStuffins (set to air on Disney Junior next month) will feature doctor-themed role play, dolls and accessories.

Interactive play sets, figures and vehicles by Fisher-Price for Mickey Mouse Clubhouse as well as plush will also be launched.

A Minnie’s Bow-Toons line will include kitchen and fashion-themed role play from Just Play and dolls and accessories from Fisher-Price.