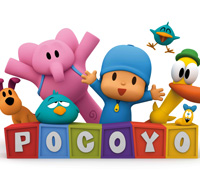 Spain's Zinkia Entertainment has named New York-based apparel company Bentex Group as the master apparel partner in the US for the hit children's preschool brand Pocoyo.

Spain’s Zinkia Entertainment has named New York-based apparel company Bentex Group as the master apparel partner in the US for the hit children’s preschool brand Pocoyo.

Zinkia and Bentex have signed a multi-year agreement that will see Bentex create a line of Pocoyo apparel for boys and girls to include t-shirts, sportswear, sleepwear, swimwear and outerwear. The Pocoyo apparel line is expected to debut at retail in spring 2013.

Random House Children’s Books, Bandai America, NCircle Entertainment and TCG are already on board to bring Pocoyo merchandise to the American market.

To date, the series has amassed more than 750 million hits on YouTube, 33 million visitors to the official Pocoyo website, and 11 million unique visitors to the virtual universe destination PocoyoWorld.