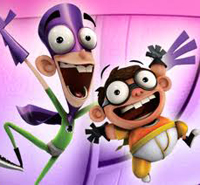 Nickelodeon's CG-animated comedy Fanboy and Chum Chum has been picked up by a slew of international broadcasters.

Nickelodeon’s CG-animated comedy Fanboy and Chum Chum has been picked up by a slew of international broadcasters.

In another Nickelodeon deal, the new Dora the Explorer Little Cooks Collection has been launched in the UK after a deal landed between Nickelodeon Consumer Products and Eaglemoss Publishing Group.