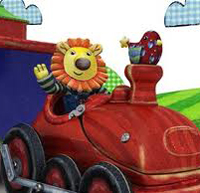 The deals for the top-rated TV series, which introduces kids to the wonders of storybooks, include BBC Latin America (seasons one and two for CBeebies), MTV3/Juniori (Finland), Yoopa Channel (French Canada), TG4 (Ireland), and Skylife (South Korea).

The deals add to the growth of the Driver Dan brand which now encompasses television, DVD, online and retail.

Since its debut on CBeebies in 2010, the series has gone on to air on ABC4 Kids in Australia, Top TV in South Africa, Minika in Turkey, Okto in Singapore, and preschool channel Sprout in the US where it is broadcast to more than 50 million homes.

The series also has an Arabic version produced by Blink Studios which airs on JCC’s Baraem channel in the Middle East and North Africa, and an English version is set to air on the region’s MBC3 channel this year.

New episodes of the second season will launch on CBeebies beginning February 27, 2012.