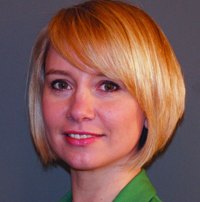 In its efforts to strengthen development and maintain its position as a top independent content group, Zodiak Media Group is rebranding as Zodiak Media and has announced new corporate appointments.

In its efforts to strengthen development and maintain its position as a top independent content group, Zodiak Media Group is rebranding as Zodiak Media and has announced new corporate appointments.

David Michel is now SVP of group marketing for Zodiak Media, and remains GM of Marathon Media. Valérie Tailland is promoted to director of group communication, and maintains her role as head of communication for Zodiak France. Demersay, Michel and Tailland are all based in Paris.

In addition to the rebranding and hires, Zodiak Rights, the international division of Zodiak Media, has hired Nicola Herrmann (pictured) in the new position of head of brand marketing. Herrmann will report to Jennifer Lawlor, SVP strategy and planning, consumer products, for Zodiak Rights. As part of her responsibilities, Herrmann will manage marketing activities for all of the children’s properties in Zodiak Rights’ (London) portfolio, as well as support licensees, broadcasters, retail and promotional partners.

Herrmann was previously the director, international brand management EMEA, at Viacom International Media Networks, where she helped grow the consumer products programs for IPs including SpongeBob SquarePants and Dora the Explorer.

Langdorf will report to Jane Kennedy, head of sales and consumer products for Zodiak Rights and will work across brands including Waybuloo, Mister Maker, Little Princess, Yo Gabba Gabba!, Simon’s Cat, Mr. Bean and Being Human.