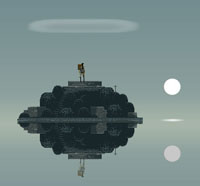 So, I wrote the last time around about how I'm trying to play more games this year, and my first real dive-in on that front was a slightly strange, definitely wonderful little game called Superbrothers: Sword & Sworcery EP from Capy, an independent game studio in Toronto. It reminded me what makes a great game, whether for kids or adults, so here are my top five things I loved about this game.

So, I wrote the last time around about how I’m trying to play more games this year, and my first real dive-in on that front was a slightly strange, definitely wonderful little game called Superbrothers: Sword & Sworcery EP from Capy, an independent game studio in Toronto. I played the iPad version, though there’s one for the iPhone as well. In many ways the game is very simple, but I also found it eye-opening in the way it reminded me what makes a great game, whether for kids or adults. I could go on for ages about all of the things I loved about this game, but here are my top five:

1. It makes the most of its medium.
One of the most breathtaking things about SB: S&S EP is the way the creators of this game worked within restrictions to make a really complete world. This is not some huge game with beautiful 3D graphics and complex layered audio that eats up all of the space in your iPad’s memory. It’s a 135 MB game with old-school looking visuals and fantastic, almost 8-bit sounding music by Jim Guthrie (who, awesomely, shows up in the game at one point, as do its other creators). 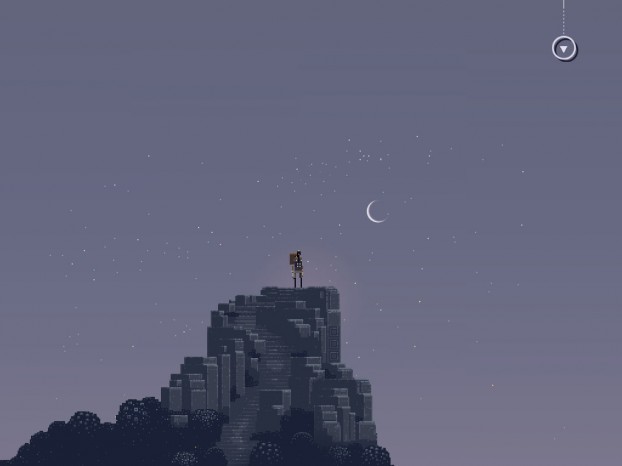 The creators of this game clearly worked in a way that kept things simple, embraced pixilated characters and environments, used a minimum of dialogue and well-conceived music, and built a really compelling aesthetic that made the most out of their resources. Then they intelligently used the variety of inputs that iPads do best (tap, touch and hold, multi-touch, tilting from landscape to portrait) as straightforward game mechanics that each function in a distinct way (I’d tell you more about this, but I don’t want to spoil the game!). What it all adds up to doesn’t feel like a compromise, but a style, and that feeling of intentionality makes this, weirdly, the hippest game I’ve played in a long time. Mostly, it feels authentic, and that feeling of authenticity is something that’s so important to what we do as well, because kids can sniff out fakery just about better than anyone. It reminded me to embrace the challenges and constraints of each project because they can turn out to be assets in the end. 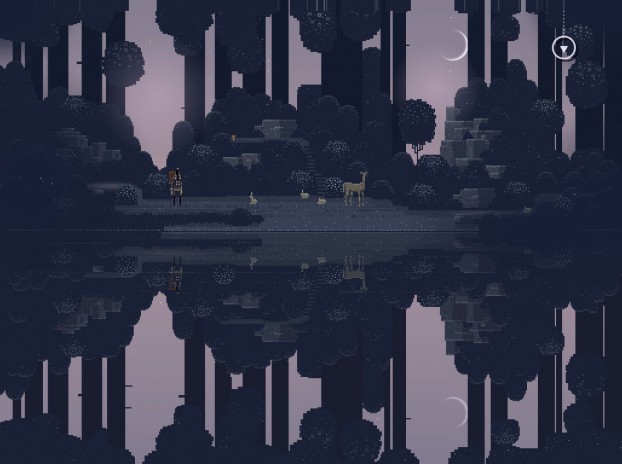 2. It has characters and a story, but it’s not overly complicated.
The plot points in SB: S&S EP are presented through very short pieces of dialogue that appear periodically throughout the game as you interact with characters or read the central player resource, a book called the Megatome. This is not a game that’s bending over backwards to give you back story or fill in informational gaps, but information and character background tends to show up when you need it.

Although SB: S&S EP is clearly designed for adults, this sparseness was instructive to me as a designer for kids as well. It’s often tempting to overwrite and to want to explain everything so that things are more “understandable,” but what we sometimes forget is that the more we explain, the more we have to explain. The simplicity with which the characters and story were set forth reminded me that often players (kids or adults) just want to play the game and don’t want to be stuck listening to some long expository dialogue. Discovering things as you go along – and sometimes not knowing everything – can be a much more enjoyable experience.

3. It’s the right amount difficult.
This one is key for me. I’m not a hard-core gamer and if I’m playing something where the controls are too hard to figure out, or the puzzles seem impossible, I’m likely to throw my hands up in frustration and turn the darn thing off. For me, this game was at a perfect level of difficulty. I died a few times along the way, but those times I was set back just enough that I could think anew about the challenge at hand and find a different way to solve it. Only once in the course of playing did I have to resort to going online and finding out what the heck I was supposed to do (and that might have been because I was on a family vacation and I needed to finish quickly before my toddler woke up from his nap…).

I don’t know how the designers of SB: S&S EP nailed this so well, but as kids’ designers, this is where we draw on our experience in developmental psychology and on kid testing to make sure what we’re designing ends up being fun for our audience. Kids are never going to learn anything from a game that they won’t play because it’s too difficult. It’s important for me as designer to be reminded so viscerally why that’s true, and I appreciated as a casual gamer being able to play something that I felt would have been challenging but fun for someone of any level of experience. 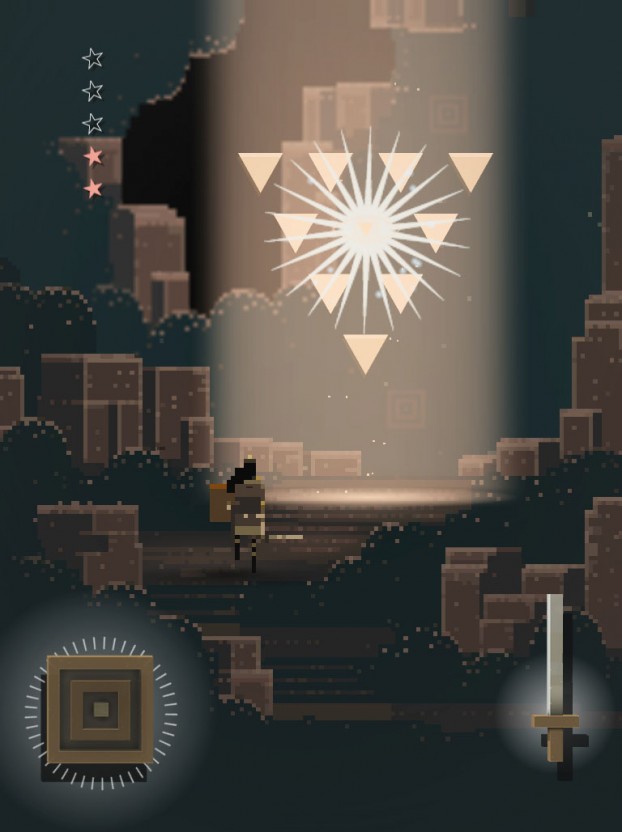 4. It takes the right amount of time.
Overall, SB: S&S EP took me about four hours to complete, and it was broken up into small missions of about a half-hour to two hours that were easily paused mid-session. As a working person, wife, and mother of two, I’m not someone who can go into my rec room and spend a whole day playing a game (that is, if I had a rec room), so I really appreciated that I could pick this game up for half an hour after the kids had gone to bed, put it away until the following night, and still complete it by the end of my week’s vacation. I felt like my five bucks had been well spent, but I hadn’t been forced into taking a month out of my life for something that was essentially an indulgent leisure activity.

This is another thing that I think it’s easy to lose track of during the game design process. As we move through design and testing, we end up playing games so many times that it’s important to step outside of the process every once in a while and think about what the whole experience of our work will be like for the kid playing – and their parents. Are we giving them a good value for the money they’re going to spend on the game? At the same time, are we designing something that will work for children’s attention spans and family schedules and take an appropriate amount of time in their day?

5. It feels effortless.
So I think the greatest thing about this game, the thing that makes it truly fun to play, is that it feels like the creators had a blast making it. One sense that the entire time the game was being developed, they kept saying to each other things like, “Wouldn’t it be cool if…?” “I think it would be fun to…” and “Don’t we have great jobs?” That kind of joy in the process really comes across in the final product, and reminded me how lucky I am that this is what I get to do every day.

So, I hope this has convinced you all that taking some time to play Superbrothers: Sword & Sworcery EP would be well worth setting aside a few hours in your schedule. If you do decide to throw in the five bucks (only three for the iPhone version!) let me know how you liked it (KidsGotGame@NoCrusts.com) – I’d love to have some nerdy conversations about the Scythian, the moon phases, and the crazy dancing bear guy with you. 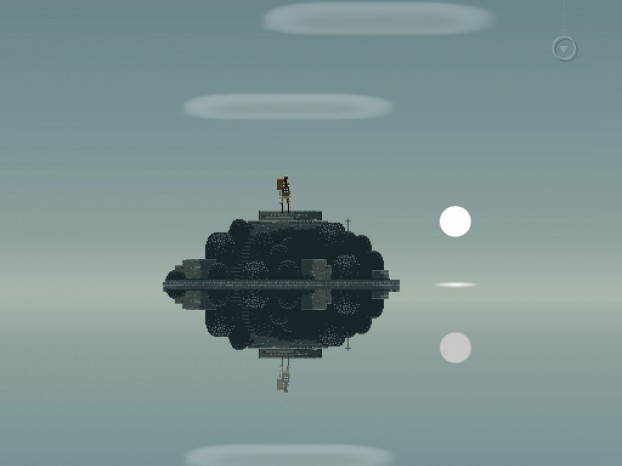