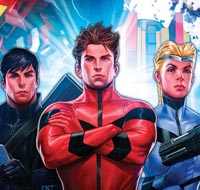 New Jersey-based Dynamite Entertainment has announced the return of Voltron, Defender of the Universe, in the brand's second comic book series Voltron: Year One, which will be released worldwide in April.

New Jersey-based Dynamite Entertainment has announced the return of Voltron, Defender of the Universe, in the brand’s second comic book series Voltron: Year One, which will be released worldwide in April.

The new series is a prequel of sorts that depicts how the series’ young heroes, Sven, Keith, Lance and Pidge, were originally called Space Explorer Squadron #686 of the Galaxy Alliance before they became Voltron Force and pilots of a battalion of ultra-high-tech Robot Lions.

On board for Voltron: Year One is Brandon Thomas (writer), Craig Cermak (illustrator), and Admira Wijaya and Jonathan Lau (covers).

The brand, owned by World Events Productions and represented by Classic Media, started as a television series based on the Japanese anime properties Beast King GoLion and Kikou Kantai Dairugger XV that first aired on US television in 1984 . An updated version, Voltron Force, debuted on NickToons in June 2011.