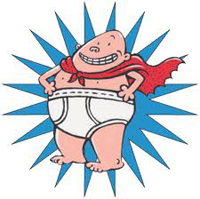 As the brand continues to expand (a recent deal was signed with Dreamworks Animation to bring the book series to the silver screen), Scholastic will also release the first Dav Pilkey e-books on January 31, 2012.

e-book versions of Pilkey’s bestselling graphic novels, The Adventures of Super Diaper Baby and Super Diaper Baby 2: The Invasion of the Potty Snatchers will feature making of bonus material, sketch samples by Pilkey, and deleted scenes.