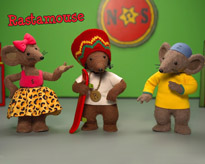 The new deals add to a growing list of licensees for the property that encompass apparel, DVDs, toys, electronics and publishing.

Rastamouse is based on the books by Genevieve Webster and Michael De Souza, and launched on CBeebies in January 2011.