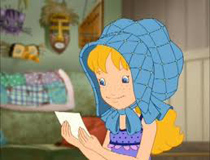 Holly Hobbie, originally developed in 1967 as a line of greeting cards by American Greetings Corporation, will now be published for teens and adults in the first quarter of 2012 by V & R Editoras in Argentina, Uruguay, Bolivia, Paraguay, Mexico, Chile, Ecuador, El Salvador, Guatemala, Panama, Venezuela, and the Caribbean.

Two multi-territory deals with Importadora & Exportadora Rosen (bags and accessories) and Lanetex (apparel) were signed for the Caribbean, Central and South America, and Kalunga has signed on for stationery, Ciranda Cultural for publishing and G Baby Industria for infant apparel in Brazil.