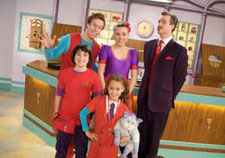 Beyond Distribution has inked a deal with Disney Junior Australia and New Zealand for its children's series Tati's Hotel.

Beyond Distribution has inked a deal with Disney Junior Australia and New Zealand for its children’s series Tati’s Hotel.

Beyond will see Tati’s Hotel air in Australia starting in February.

The show, which was originally commissioned by UK broadcaster CiTV and TV Ontario in Canada, stars Mya-Lecia Naylor as eight-year old Tati, who runs a magical hotel with an assortment of friends acting as the hotel staff.