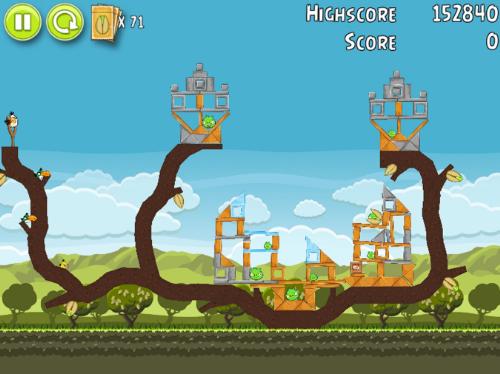 With its consumer products program taking full flight, the Angry Birds franchise is moving into the branded advertising world through a new fully custom game developed for Wonderful Pistachios.

With its consumer products program taking full flight, the Angry Birds franchise is moving into the branded advertising world through a new fully custom game developed for Wonderful Pistachios.

The Hunt for the Golden Pistachio, which launched yesterday, allows users to win a total of US$300,000 worth of prizes through playing a customized version of Angry Birds.

Throughout the month of December, players can log on to www.getcrackin.com using a Chrome browser and play the game, which has the birds cracking open pistachios as well as destroying pigs. US residents 18 and up can earn prizes in levels three and higher by sharing aspects of the game on Facebook and Twitter or entering a Get Crackin’ code found on bags of Wonderful Pistachios. Once they enter the code, players will be able to find hidden in-game Golden Pistachios that can lead to real-life rewards that range from free pistachios and Angry Birds plush toys to US$25,000 cash. After December 31, all levels of the game will be open to all players.

The game, developed with advertising agency Fire Station, is part of a larger integrated promotional partnership between Wonderful Pistachios and Angry Birds creator Rovio Entertainment. The Birds were featured in a Get Crackin’ad campaign this past fall.

The game also marks the latest step in Rovio’s burgeoning franchise, which has so far expanded into merchandise, entertainment and book publishing.