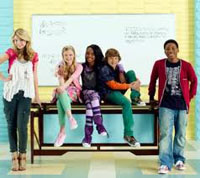 A.N.T. Farm, Disney Channel's comedy series for kids ages six to 11, has been picked up for a second season.

A.N.T. Farm, Disney Channel’s comedy series for kids ages six to 11, has been picked up for a second season.

Produced by It’s A Laugh Productions and created by Dan Signer (The Suite Life on Deck, The Suite Life of Zack & Cody), the series premiered in July 2011 and centers around Chyna Parks, an 11-year-old musical prodigy who attends high school as part of the prestigious A.N.T. (Advanced Natural Talents) program.

The music-themed series has so far inspired a soundtrack and music videos as well as the D-Signed girls’ clothing collection now available at Target stores across the US.