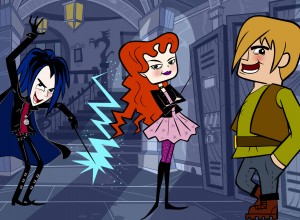 The series – a global co-production between Anima Estudios, SLR Productions, Home Plate Entertainment and Telegael – tells the story of Jeremiah, Fury and Trafalgar, three best friends and second generation fairytale characters who are determined to just be themselves.

An HD flash-animated show, Teenage Fairytale Dropouts is slated for a 2013 release.