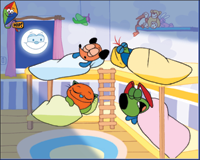 Israel's Hop! looks to branch into new territories with a multi-platform approach.

The challenge Just over a decade old, Israel’s Hop! is focusing on building its digital reach and expanding into other territories. Owned and operated by Zebra Communications, Hop! launched in 2000 as the country’s first commercial-free dedicated channel for kids under seven. Airing on basic cable, it’s the third-most viewed channel among the 160 found on the platform in Israel, and is seen in 90% (1.6 million) of Israeli households. Along with sister preschool channel Luli, Hop! now leads kids channels with a 28% market share in the territory, followed by Noga-owned Children’s Channel (21%), Nickelodeon (16%) and Disney (13%).

The Programming Broadcast seven days a week from 5 a.m. to 8 p.m. to approximately 800,000 children ages one to seven, the channel has a solid mandate to air non-violent, parent-approved shows.
CEO Alona Abt says between 60% and 65% of the channel’s programming comes from acquisitions, and adds that being an independent gives her team the freedom to cherry-pick programming from big studios such as BBC Worldwide (In the Night Garden) to indies like Iceland’s LazyTown. Abt says the remaining 40% is produced in-house and includes live-action puppetry, documentaries and animation. Hop! is also co-producing an Israeli version of Sesame Street with Sesame Workshop, now in its fourth season.

From 5 a.m. to 7 a.m., the channel runs locally produced series, followed by an hour of before-school programming that includes shorts like in-house production The Kuntz Family. Throughout the day, airtime is focused on non-violent shows like Care Bears, Strawberry Shortcake and in-house series Yuval Hamevulbal. A two-hour evening block with bedtime programming caps off the schedule with a bedtime story.

“We’re continually making improvements to adjust to the family routine,” says Abt. She cites the recent re-packaging of animated shorts into interstitial segments that are active and playful during the day and calming in the evening.

Abt says she is always on the lookout for new programming and currently has shows that promote environmental awareness—particularly nature shows and series that present an ecological message—in her sights.

Digital Initiatives Hop! sees an average of 800,000 online visitors per month and is now focusing on making content available to kids on all platforms.
The net’s leading series are now available in both Hebrew and Arabic via each of Israel’s cellular carriers. The Hop! Group is also planning to roll out Hop!- and Luli-branded apps for Apple and Android devices in several languages this fall.

Additionally, the net re-launched its interactive channel Hop! Learning this summer to incorporate VOD offerings along with educational remote-control games that feature Hop!-branded characters. The team also overhauled the Luli website to cater to an increasingly younger user base that offers art galleries for toddlers, online games featuring the channel’s characters, and informational support for parents.

Next moves Hop! is determined to expand as a multimedia brand into new regions. But rather than trying to create an international presence quickly, Abt says her team will be evaluating new territories carefully to choose ones that will be long-term revenue generators. Abt explains that the returns yielded by the old media business model built on collecting license fees from cabsat carriers have shrunk, putting even more importance on mobile delivery and touchscreen applications. “There is a new model now, and it’s between us and the end-user who buys the service,” says Abt. Generating online revenue, in the form of advertising on Hop!’s parenting websites, is also part of her plan.