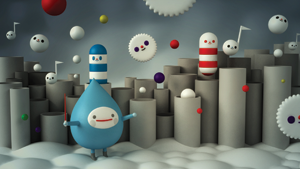 Bill Schultz is back at bat

Home Plate Entertainment's emphasis on collaboration trickles down to its very name—a baseball metaphor that shows how animation is just as much a team effort as America’s favorite pastime.

Who Bill Schultz, CEO of L.A.-based Home Plate Entertainment. After a decade-long stint at Moonscoop, the Emmy-winning animation exec launched the company a year ago in answer to what he saw as a need to create a partner-driven entertainment company in a constantly evolving and geographically shrinking animation industry.

“To me, it’s about the talent and not about where you do the work,” says Schultz. “The evolution of digital technology has also allowed collaboration across the globe to be effective.” On a daily basis, his team of six employees taps an international talent pool that includes storyboard artists in Canada, prop designers in Europe and story editors in Australia. The company’s emphasis on collaboration trickles down to its very name—a baseball metaphor that shows how animation is just as much a team effort as America’s favorite pastime.

You might recognize… One of Home Plate’s upcoming projects, Wild Grinders, which recently sold to NickToons US and will bow on the network next year. The 26 x half-hour animated series, aimed at kids ages six to 11, was created by skateboarder and MTV personality Rob Dyrdek, who will also voice the series. Moonscoop, meanwhile, is handling the licensing and distribution.
Creating a stellar season Schultz believes that the amount of work Home Plate has lined up in just a year proves that you don’t have to be a big studio to get things done. “It’s still a touch marketplace and I have respect for anyone making any shows, but as an indie you’re flexible and able to work in a collaborative environment,” he notes. Of course, choosing the right partners isn’t always as easy. Schultz says he typically looks for people who are really bringing a missing ingredient to the table, whether it’s on the creative, finance or production services side.

Next up In addition to Wild Grinders, Home Plate’s I Was a Teenage Fairytale Dropout is heading into production with Anima Studios, SLR Productions and Telegael. Set for a late 2012 delivery, the tween series is a contemporary take on the lives of the teenage spawn of famous fairytale characters. And for the preschool set, CGI music-based Wish Come True (pictured) is currently in development and aiming for delivery in 2013.