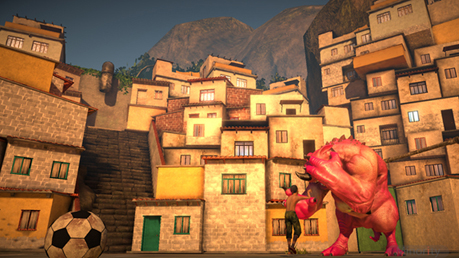 The money is being distributed to Sony’s network of internal first-party studios as well as to its venture capital arm, the Sony Pub Fund, which includes distribution and marketing support.

Among the companies benefiting from the latest round of investment are Canada’s Minority and Capybara Games. Upcoming game Papa & Yo (pictured) from Minority is among the four titles announced with the news of the investment. The game involves players taking control of a little boy and his best friend, Monster, as they build their friendship and solve puzzles as they navigate a surreal world.

And with the network’s reach of 77 million worldwide user accounts, PSN director of marketing Brandon Stander says that users have a “voracious appetite for innovative and original content” beyond blockbuster releases of triple-A titles.

As for what Stander is looking for going forward, he says, “The developer has to have a unique vision and it has to be something that is inherently ambitious to bring to the world of gaming. When we see that, when we find that, whether it be through visual style, gameplay mechanics, storyline, we want to make sure that that’s exclusive to PSN.”

Interested parties can reach out to Sony via its SCEA PlayStation-edu program, which is runs in association with universities in Canada, the US and Latin America, and via indie developer events, including IndieCade, Independent Games Festival pavilion at Game Developers Conference, and an IndieCade area at E3.