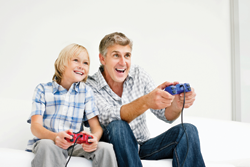 When it comes to digital marketing and parents, are dads the new moms? Not quite, but a new study finds fathers are in charge of kids' interactive curriculum.

When it comes to digital marketing and parents, are dads the new moms? Not quite, but change is undoubtedly in the air in terms of parental roles and dads’ involvement with their kids. At least that’s what recent data from Ipsos’ LMX Family study indicates. The US-based syndicated research program that provides trended data on kids’ media habits surveyed more than 2,080 US kids ages six to 12 and 715 of their parents. It found that not only do 72% of today’s dads believe they’re spending more time with their kids than their fathers before them, they are also spending more time than moms engaging in digital entertainment with their tikes.

“Marketers never want to exclude moms because they still make most decisions, but we’re seeing in certain entertainment segments that dads really have a say and the things that trigger their interests and spending are different,” says Donna Sabino, SVP of kids and family insights at New York-based Ipsos.

“What we found when conducting the study is that the whole family system and the ways people are parenting have really changed,” says Sabino. “These are the dads who grew up with Sega Genesis and Nintendo, so gaming is fun for them, too.”

While major advances in technology have helped to bridge the interest gap between dads and their kids, Sabino says inherent differences between male and female parents are also being highlighted by certain forms of entertainment. For instance, the research shows that dads are more likely to pay for music, games, movies, television shows and educational content.

“It’s not a stretch to understand why fathers are spending more. Part of the reason is that mom does the bulk of interacting in terms of child care. So when she’s asked for things she often asks ‘Why?’ Dads, on the other hand, have a different set of criteria that centers upon ‘Why not?’”

That paternal mindset is focused on keeping entertainment playful for their kids through turnkey experiences. Dads traditionally view online expenditure as a miniscule purchase to keep the fun going. They “are looking for low-maintenance, high-entertainment solutions for their kids and are willing to pay extra for it,” says Sabino. She adds that marketers need to let fathers know they are there to make that pre-packaged entertainment readily accessible.

Perhaps the study’s most telling finding is that 33% of dads are friends with their kids on Facebook, which prohibits users under the age of 13. The study—which focused on kids 12 and under—reinforces the notion that parents are openly condoning their children’s illegal presence on the world’s largest social network. Still, Sabino contends that dads’ Facebook relationships with their kids are more protective and guardian-like than social by nature.

It seems they’re also closely watching their kids’ progress in the digital order of things. In terms of media attitudes, 84% of dads, compared to76% of moms, believe it is essential for kids to learn computer skills as early as possible. Dads, for example, are stereotypically eager for kids to take the training wheels off their bikes and begin riding on their own. The same could be said for their approach to teaching a digital curriculum—it’s just the vehicles have changed, that’s all.