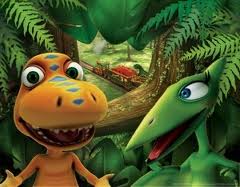 The steel wheels are rolling on a promotional partnership between US rail operator Amtrak and The Jim Henson Company to coincide with the season premiere of Dinosaur Train.

The steel wheels are rolling on a promotional partnership between US rail operator Amtrak and The Jim Henson Company.

To coincide with the season premiere of Henson’s Dinosaur Train with one-hour special Dinosaur Big City on PBS and its subsequent DVD release in August, the series’ main character Buddy is being featured on 1.5 million ticket jackets. Additionally Dinosaur Train licensee Random House is producing 150,000 free activity booklets to be distributed on-board, and Dinosaur Train placemats, seatbacks, counter cards and signage will start popping up in Amtrak depots located across the US.

“About nine months ago we both decided that it would make sense to strike up a partnership,” says Melissa Segal, Henson SVP of global consumer products. “We created the promotion with them.” And Deborah Vernado, director of branding and promotions for Amtrak adds that it was a natural partnership.

“It always seemed like a good fit,” Vernado says. “Kids love dinosaurs and trains, so why wouldn’t Dinosaur Train and The Jim Henson Company be good partners?”

A Dinosaur Train sweepstakes that grants customers a chance to win an Amtrak Vacations Rocky Mountain National Park Tour (a trip for four to the Rocky Mountain Dinosaur Resource Center in Woodland Park, Colorado) is also getting underway.

To help drum up entrants, the Dinosaur Big City DVD from Paramount Home Entertainment will also contain contest messaging. “We were sure to bring a number of licensees into the promotion,” says Segal. “I think they are looking for anything they can these days to help create awareness and a splash beyond channel promotions.”

Amtrak has held similar promos with other children’s IP before, including Scholastic’s 39 Clues and HIT’s Thomas & Friends. Segal says Dinosaur Train’s partnership with Amtrak will be a “good story to tell at retail” heading into the fall.

“Everyone is trying to convince retailers that their products should stay on the shelf,” she says. “Anything that raises the profile of the series is a positive.”