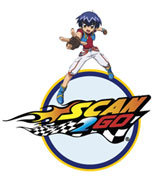 Scan2Go is a go in Italy

The series will premiere in Italy next month on free-to-air children’s channel K2, which is distributed to 19 million Italian households.